This coastal town is a grown-up beach village.

One might argue that it’s the beach that makes a place the best beach town, but Hilton Head Island proves something even more true: It’s the richness of the town that wins the day, and in this case, the hearts of its 40,000 locals.

Let’s not dismiss Hilton Head Isand’s superb beach bona fides, however: Tucked snugly against the water-riven coast of South Carolina, the foot-shaped island exposes 12 miles of broad, tawny sands to the Atlantic Ocean’s rolling swells. All 12 miles are public beach that feel both expansive and inclusive (several access points include mats for wheelchairs). And with an average air and water temperature of around 70 degrees, that’s about as pitch-perfect as beach life gets. 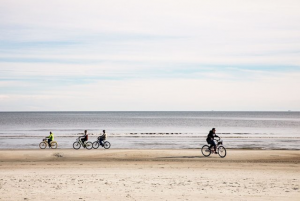 But Hilton Head is far more than sun-loving fun. First, it is home to one of the great American cultures, Gullah, which evolved from the beliefs and practices of Africans enslaved on (and later liberated from) Hilton Head’s indigo and Sea Island cotton plantations. In fact, the island is home to Historic Mitchelville Freedom Park, site of the first self-governing village of liberated slaves—then called “freedmen”—in the nation. Set beneath arching oaks on Port Royal Sound, Mitchelville is now a center for touring and education and is emblematic of a welcome surge in Gullah-focused tours, festivals, and cuisine as well as an increased awareness for the 2.67 million visitors who cross the bridge onto Hilton Head Island every year. 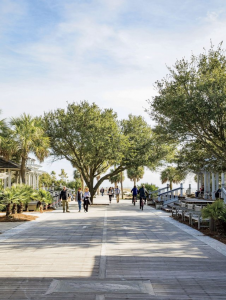 Second, and just as important, Hilton Head Island feels all grown up. The sparkling eco-community (with a serious nod to golf) that real estate developer Charles Fraser carved out amid the island’s dense pine stands in 1956 has matured into a collection of gated neighborhoods surrounded by live oaks, magnolias, and palmettos; linked by neon-free boulevards bordered by bike paths; and boasting clusters of markets, bars, boutiques, and more than 250 restaurants. 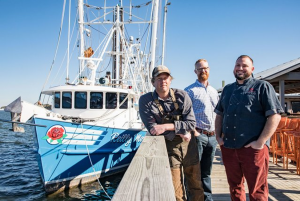 First-time visitors fall in love with Andrew Carmines’ local oysters at Hudson’s Seafood House on the Docks and with homegrown chef and owner Clayton Rollison’s sophisticated (and often Gullah-inspired) culinary takes at Lucky Rooster Kitchen + Bar. Hilton Head is home to one of the coolest jazz clubs on the East Coast (The Jazz Corner) and the best croissants this side of the Atlantic (at transplanted Parisian Philippe Feret’s Hilton Head Social Bakery). 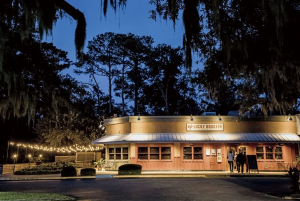 “It’s amazing,” Rollison says about his home island. He grew up running places barefoot, riding bikes, and messing around with boats. “There’s so much here that’s sophisticated now,” he says, lingering among the rare imports at Rollers Wine & Spirits, an urbane bottle shop, with his friend Tony Bagnulo, who’s adding to Hilton Head Island’s spirits game with his own top-shelf Bulrush Gin.

And that magical mix of mild climate, small-town charms, and cosmopolitan pleasures has built a varied community of young families looking for quality of life; digital nomads who want to paddleboard before work; and creatives like potter Tayloe Cook, whose rustic stoneware is decorating upmarket restaurant tables throughout the area. Despite all of Hilton Head Island’s creature comforts, Rollison says, “You can still feel the wildness here, especially when you get out on the water.”

If you’re both in need of some rest and relaxation, the beach is the easiest decision ever. Sink your toes in the sand, grab a good book, and live a slower pace for a spell. And don’t forget to hit a seafood dive (or two, or three). Read more:The South’s Best Beach Towns 2019 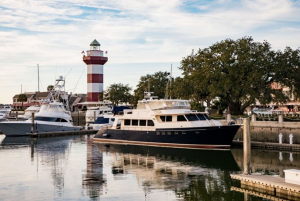 He has a point. The salt marsh back side of the island bristles with private docks and skinny piers, and public marinas shelter watercraft from luxury yachts to skiffs, most of which have shallow drafts to navigate the tide-ruled labyrinth of waterways ideal for fishing, cruising, and hiding away.

Those waters often lure bottlenose dolphins to breach and play, great blue herons to stalk fish, and The Sea Pines Resort president Steve Birdwell to take his boat out with his wife, Beth, every evening. “We head out and just roam,” Birdwell says. “We watch the sun go down and sometimes have a glass of wine.” They do this every night? “Every night,” he says. “It’s just that beautiful.”